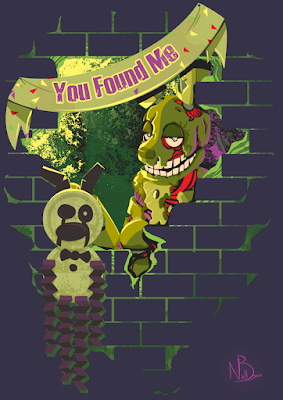 Hey Guys and Gals today I present you "We Love SpringTrap" its is My fanart illustraton of SpringTrap from Five Nights at Freddy's 3 game.  At Eirtakon I was asked for afew more of the other characters that people Love and SpringTrap was the most asked out of all of them lol so I spent the last 3 months working n my spare time of this one.  This was by far the hardest character to get looking right.  I spent a lot of time getting a Nice mix between stills and the jumscares them selves.
here is a small breakdown of the illustration. 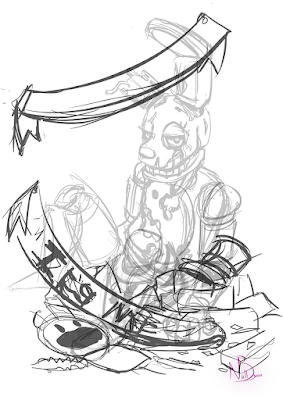 I started with a really scribbley version of the character,  In SpringTraps back story the audio says he was found in one of the old abandoned restaurants behind a brick wall.  So I wanted to do the pick like they were breaking down the wall and find SpringTrap learing out of the broken wall. covered in little easter eggs from the game. 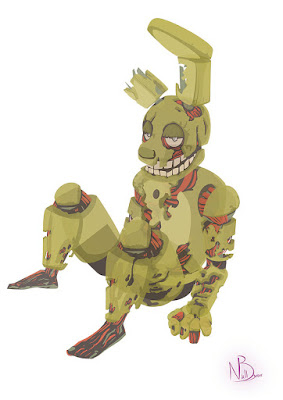 After finishing the rough I wourked on making a full version of SpringTraps body for possibly another animation maybe. and also maybe an alternative version of of the design where you can see the full body.  Each body part is separated into different folders and in each folders there broken up into all the different shapes.  I made the characters folder a little see through so u can see the layers underneath.

After I had finished the character I worked on masking springtrap behind the brick wall and I added a Banner and the Paper Plate in front as the easter egg, Im not too sure but I think that that this paper plate kinda represents Springtrap so it would make sense it would be close to where springtrap is hiding.  I also added a greenish tint shading to the character and a strong yellow light to make him look more golden.  I wanted the colour palette to  be mostly Yellow, green, Red and Purple.  The purple represents the purple guy how is possibly the killer in the game and the red is danger and also just flesh to show there is more to SpringTrap the you see.

anyway thank you all for checking out the break down there will be another illustration coming out very soon. So please stay tuned :)

and follow me here for my other social site go here

Thank you so much again for checking out the blogger stay tuned for more illustrations and animations.
Posted by Niall Byrne at 11:34:00