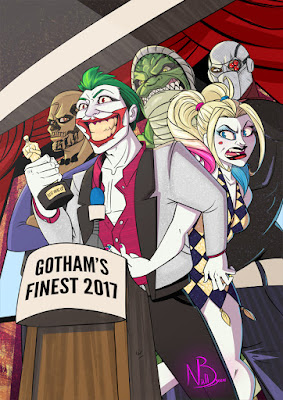 Hey guys and gals.  Its been way too long, I have been working on a few projects, one is a tv series  and the others are personal secret projects that will hopefully will come out near the end of summer time this year of next year.  While I've been working I have been doing this Illustration in my spare time.  I will also be selling prints at this years Dublin Comic Con.  This one will probably be on sale and will hopefully do a little mini collection of batman characters if I can come up with something original.  And be putting up more and more prints that will be for Dublin Comic.

This is a parody and social comentary on Suicide Squad winning the Oscar for  "Best Make-Up".  its not the versions that were in the movie, these are my interpretations of the characters.  Its mostly for fun.  I am mad about batman character since the arkham knight game came out a couple years ago.  Essentialy Joker swipes the Oscar out of harleys hand stealing  the spot light from all the other character.  The other characters costumes and make up were great but joker was not well recieved and will always be the negative focus on them winning the award.  I still believe there were other films more worthy for the award and honestly its shocking that suicide squad was nominated considering all the negativity the film recieved.

Anyway lets get to the breakdown. 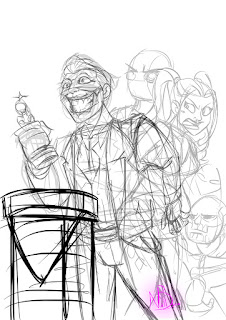 I started after the Oscars had happen and saw that Suicide Squad had once best make up.  I thought that would be funny as a  gag of having Joker holding up the award, there were alot of people hating on that version of Joker and as if he was the only reason the won the award.  Which I think is untrue.  there were lots of great character designs in the film, alot of the very appealing.  Joker was probably the weekest one.  So to rub salt in the wound I have joker holding the trophy with a big grin on his face while the suicide squad look on displeased at joker. 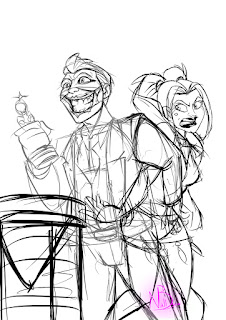 After the first rough I worked more on the characters designs and tried my hand at making my own version of the characters.  It took quite a while to get harleys proportions right, but it worked out in the end. 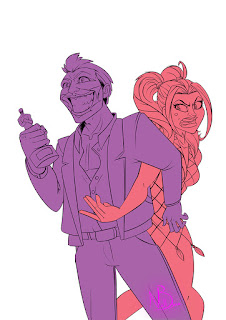 Once I was happy with the rough I worked on the line work.  I spent alot of time making the line work look right.  Thining and thicking the lines were there is a strong crease or a but of shadow too. 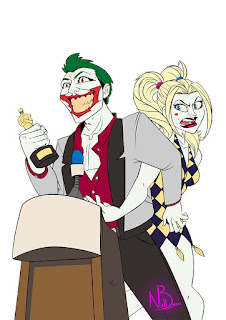 After line work I worked on colour.  taking inspiration from the Suicide Squad film.  I really loved Joker and Harleys gold and Silver costumes they had in the film.  Really loved the creativity from what you usually see in the comics, tv, or animated stuff.  I did change it a little bit by making the Jokers blazer more in the style of a bomber jacket.  Just to make him look a bit more gangster/ mobster feel to it and taking away the tattoo's because I felt it was a little to much. 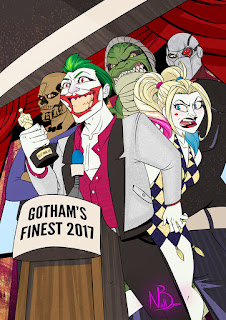 Once that was done.  I worked on adding as many of the sucide character as I could.  I couldnt get everyone in but I chose Killer Croc, EL Diablo and Deadshot because I like there costumes, make up and over all appearance.  I did do my own twist on the character too, mainly Killer Croc.  I also added my own home made textures and used my amazing texture brushes I bought around christmas for the small bit of texture around Croc's face.  I also used those brushes to make Harley pink and blue hair and make up. 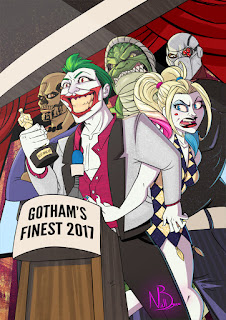 And finally I added more shading, highlights and little extra detail to the characters to make them pop plus the background too.


anyway I hope you all enjoyed this break down, if you like please share it around with friends and check out my other sites.

If you like the brush and want really good texture brushes for your own buy the here!  I never usually buy brushes but I though I might give it a try and (lazyness and frustration on making my own)  I will probably buy more cause there really good and really cheap.  the ones I bought were the Gouche Brushes, hope this helps.

Thanks so much again for checking out my work :)