It's just a Flesh Wound! 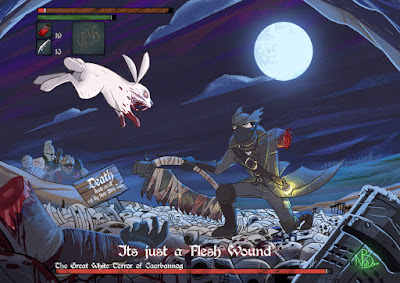 Hey guys and gals.  Here is another illustration from Dublin Comic Con 2017. This is a mash up of BloodBourne and Monty Python. This was by far the most difficulty image of them all and I owe alot of credit to my girl friend Erin, She really helped me come up with ideas and get it the illustration looking right.  I really love Blood Bourne and wanted to do a funny mash up with  Monty Python and something I always found myself saying when I was a pinch away from dieing, I would say ha its just a flesh wound.  It happened one to many times when playing through the game. 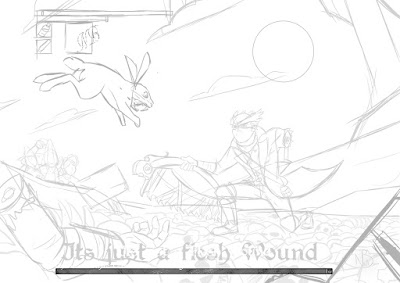 The Rough took a very long time.  I was really struggling on whats the best way to make a mash up between Bloodbourne and Monty Python.  I had alot of help from my girlfriend,  I hadn't seen it fully before and only saw clips, so we watched the full Monty Python film together to come up with ideas.  Watching the full movie gave us a much better understanding of the film.  I wanted desperately to use the evil rabbit but also wanted a reference to the Black Knight so I have the default character from Bloodbourne fighting the Rabbit.  The Bloodbourne character looses an arm from the Rabbit and is recovering ready to go again because hunters can regenerate health if the attack quick enough so the title is 'Its just a flecsh wound' which is a quote from the Black Knight.  I also include his helmet in the forground. 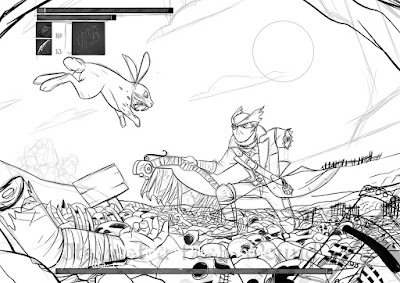 After working out the rough I started working on the line art.  each of the parts are broken in seperated parts.  The hunter, the rabbit, and the background is broken into multiple parts too.  The background is the cave the rabbit gaurds in there film and the gorund is covered on bones and skulls.  It took a long time to get the skulls finished and tried to make the ground look like there are distant bones. 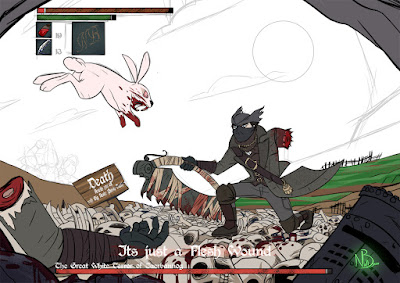 Once the line art was done I moved onto adding the color.  I tried sticking to the base colors and adding little batches for color in the grass and bones. 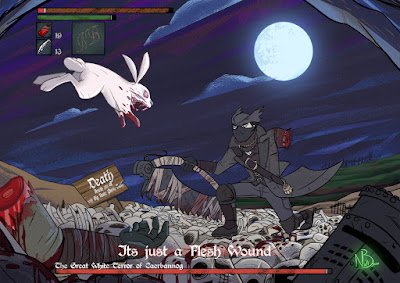 Once all the color was done I worked on the knight sky and I tinted the rest of the characters and added the subtle lighting and texture like the blood stains and different textures for the clothing.  I also added the life bars as if the rabbit is a boss battle. After that was done I adding extra lighting from the moon and the characters lantern as see in the final version.

Thanks so much again for checking out the break down, I'll be posting more soon so keep a look out.
Posted by Niall Byrne at 11:16:00